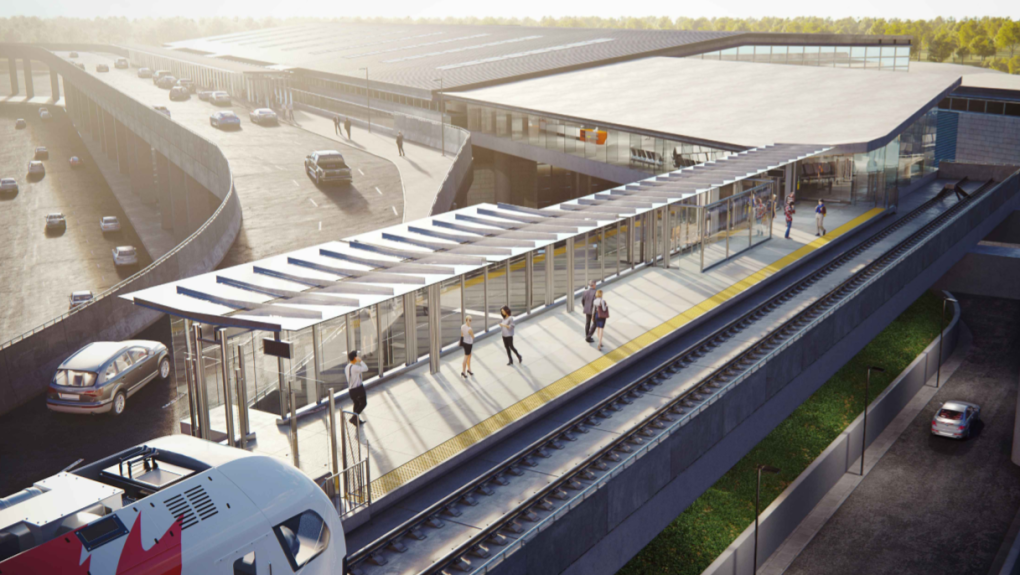 An artist’s rendering of the future Trillium Line LRT station at the Ottawa Airport. (Image via the City of Ottawa)

OTTAWA — The federal government is chipping in just under half of what the Ottawa Airport says it needs to build a future LRT station.

Transport Minister Omar Alghabra announced $6.4 million in funding to the airport for its Trillium Line LRT station, which is set to be completed in 2022.

The Ottawa Airport had previously said it could not afford the cost of building the station after revenues plunged severely when the COVID-19 pandemic began and air travel came to a near standstill. The airport authority said last year it needed $13.5 million to cover the costs. The total cost of the airport LRT station is $16.9 million. The government says it “remains committed” to seeing the project through to completion.

In a news release Wednesday, Mark Laroche, president and CEO of the Ottawa Macdonald-Cartier International Airport Authority, expressed gratitude for the funding.

“Today’s announcement and the confirmation of funding for the Airport Terminal Station is welcome news. It will help us fulfill our commitment to build the station and ensure that YOW’s passengers, airport employees and surrounding communities are well served by reliable, predictable light rail service well into the future,” he’s quoted saying. “Connecting the airport with the city centre and beyond by rail will be an important selling feature as the aviation and tourism industries recover and we work to bring major events and conferences back to Canada’s Capital Region.”

“The construction of the light rail transit station at the Ottawa Macdonald-Cartier International Airport will reduce traffic congestion and improve accessibility and connectivity to the airport by offering an environmentally sustainable direct link between downtown Ottawa and the airport,” Alghabra said.

The Trillium Line extension will bring the north-south O-Train line to Riverside South with a spur to the airport. TransitNEXT, a wholly owned subsidiary of SNC-Lavalin, is building the extension. While the line is still expected to be completed in 2022, the City of Ottawa said it was reviewing possible delays caused by the COVID-19 pandemic. John Manconi, the city’s outgoing manager of transportation services, told councillors in May that a full update on the construction timeline wouldn’t be available until the end of this year.