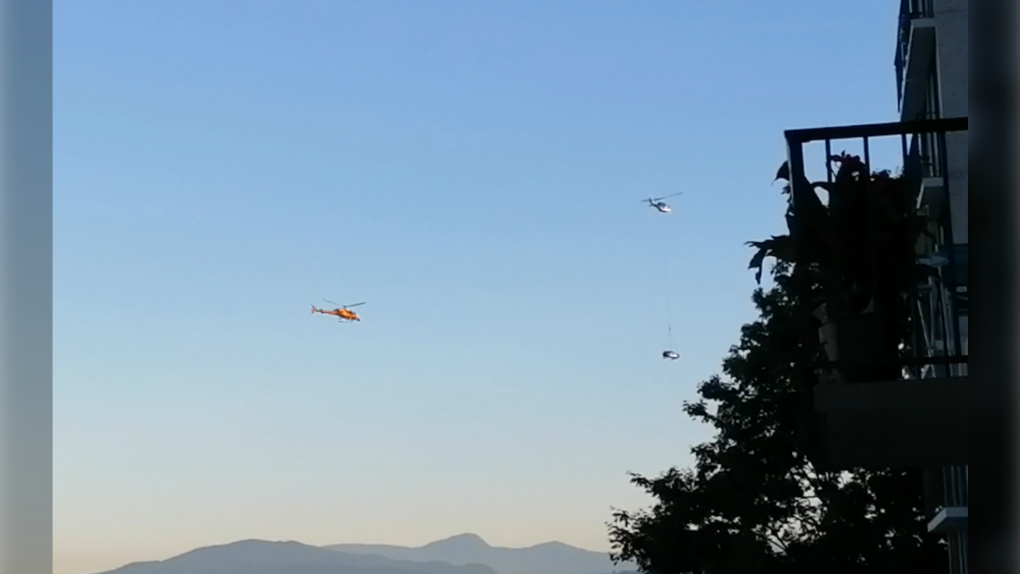 Two helicopters, one toting an SUV, are seen over Vancouver on Tuesday, June 22, 2021. (Submitted / Ian Bruce)

VANCOUVER — Some people woken at sunrise by loud noises were surprised to see an SUV in the air over Vancouver’s English Bay.

Video posted on social media shows helicopters hovering by the Vancouver skyline, one with an SUV dangling beneath it.

Those who witnessed the strange sight said they’d heard the noises between 5 and 6 a.m. Tuesday.

It appeared, based on their accounts, that someone in one of the helicopters may have been filming the one toting the SUV.

One witness in the area said he’d seen the aircraft flying low over the area with the vehicle in a sling, and that they’d circled around English Bay and the city’s West End neighbourhood.

Some called Vancouver police to complain about the noise. One told CTV News he’d called officers to “report this very unusual aviation activity,” and that police had told him they didn’t know what was happening, but they’d be sending officers to investigate.

A spokesperson with the police department told CTV the strange scene was part of a shoot for a commercial.

It turns out Subaru Canada was behind the incident. In a statement, the company said all necessary protocols were followed.

Subaru said those involved in the shoot had clearance from both municipal officials and from Transport Canada, which included recommended timing.

“We also wish to apologize to anyone we unintentionally disturbed while we were in the area,” a spokesperson for the company said in an email.

That was a very loud helicopter passing back and forth over English Bay before 6:00am this morning.
It was a rare sight to see a vehicle dangling from it! Filmed from the second helicopter, I suppose.@yvrshoots, what’s up? pic.twitter.com/LeUeKMTpIb— Tahiti Trot (@TrotskyTrotter) June 22, 2021

For the last 30 minutes all I hear is a chopper, just looked out my window and saw this! @NEWS1130 @yvrshoots back and fourth over English Bay pic.twitter.com/oD5izHaSn5— MrViddles (@mrviddles) June 22, 2021