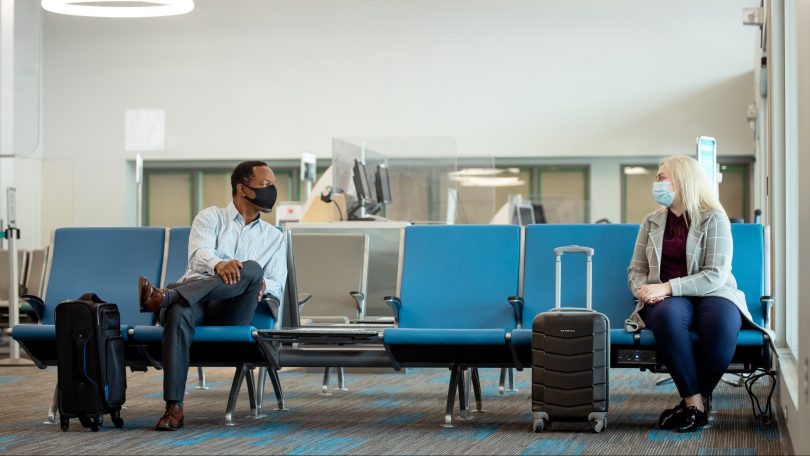 FREDERICTON— Porter Airlines has resumed service at Fredericton International Airport (YFC), meaning that all of the airlines that were flying before the pandemic have returned.

“It’s just wonderful to see all of our teams back in business,” said Kate O’Rourke, manager of public relations and marketing at YFC.

The Porter plane is a daily flight that goes from Fredericton, makes a stop in Ottowa, and goes on to downtown Toronto, landing at Billy Bishop Airport.

Porter Airlines joins airlines like Air Canada and West Jet, both who resumed service at the end of June. Since the pandemic began they have picked up another airline, Pal Airlines.

YFC saw the number of West Jet and Air Canada flights going up over the summer.

“August was definitely the busiest month,” said O’Rourke in an interview with Huddle. “We were up to almost 50 percent of our pre-pandemic traffic levels for that month. For Canada that is pretty good.”

O’Rourke hasn’t seen the numbers for September yet but expects numbers to cool down a bit as they usually do in the fall.

This summer also gave them a chance to test out the newly expanded terminal that was renovated last March.

O’Rourke said that she expects all airlines at YFC are here to stay.

“All the airlines have told us that it was a great summer, and they’re really committed to the Fredericton market and they see the strength of the market in the long term potential there,” said O’Rourke.

O’Rourke said that some travel is for business but she is mostly seeing travel for friends and family that haven’t gotten to see each other over the last year and a half.

She expects flights to kick up in winter during the holidays. For travelers who need them, PCP and rapid testing are available at the airport as a fee-for-service through a private company.

“That’s really for travelers who are departing,” said O’Rourke. “So if you’re going to a destination that requires that test before you arrive in the country.”