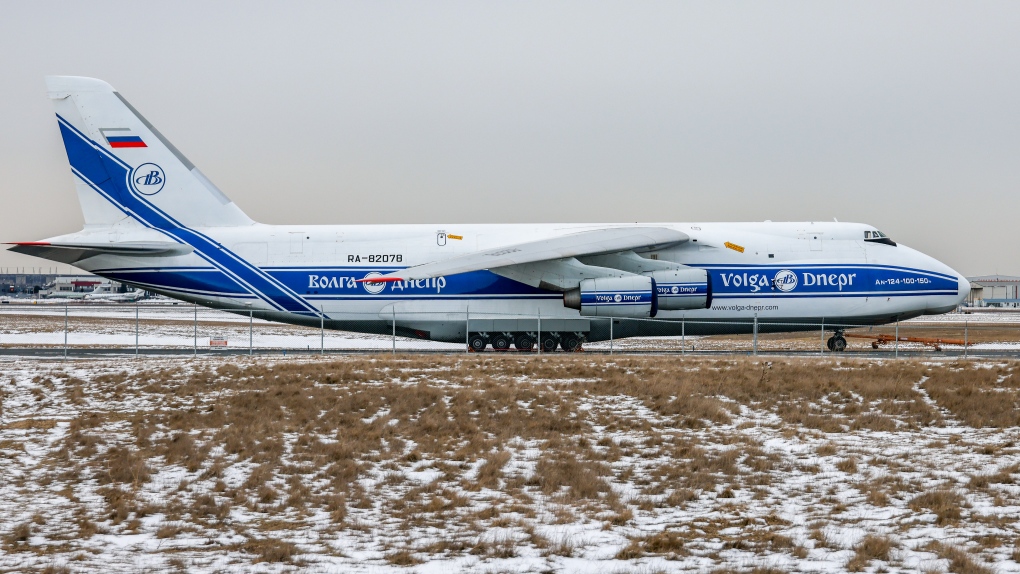 This Russian cargo plane has been stuck at Pearson since Feb. 27. (Tom Podelec Aviation / @TomPodolec)

A large Russian plane has been grounded at Toronto Pearson International Airport and has been prohibited from leaving indefinitely.

The Russian cargo plane, belonging to the airline Volga-Dnepr, has been parked at Toronto since Feb. 27 after the Canadian government closed the airspace to Russian aircraft operators.

The Antonov An-124 arrived into Canada from China, via Anchorage and Russia. The plane had planned to leave Toronto shortly after arriving in Canada, but that flight was cancelled.

“There is currently one aircraft at Pearson that is prohibited from departing,” a spokesperson for Toronto Pearson said in a statement to CTV News Toronto on Thursday.

Transport Canada also confirmed the aircraft as been prohibited from departing due to a ban on Russian-owned aircraft in Canadian airspace.

“Transport Canada is aware that there is a Russian aircraft currently grounded in Toronto,” the agency said in a statement Thursday. “While Transport Canada has not seized any aircraft, the aircraft is unable to depart in Canadian territorial airspace as it would be in violation of the Notice to Airmen or NOTAM, which may lead to enforcement actions taken by Transport Canada.”

Transport Canada said they “will not hesitate to take further enforcement action should additional incidents of non-compliance with the regulations and restrictions be found.”